The technological revolution never stops not even during the festive season: while your competitors are celebrating with family and friends, gorging on cakes and desserts, you could be one step ahead by getting informed about the technology which is enriching many companies all over the world:

and many other Italian companies are quietly approaching 3D printing to speed up their production.

Why is this change taking place without much publicity?

When you find a trump card, a trick to beat your opponents on the playing field, you try to keep it to yourself as much as possible

You may consider 3D printing a technology that is still distant from the reality of your enterprise, and that you have no cause to be interested in this new production method, because you already have your profit margins with the chip removal method and machine tools.

These could be the thoughts going through your mind when you hear talk about additive methods:

“I have other more important investments to make first”

I don’t have time. Anyway 3D printing technology is still too little known.” 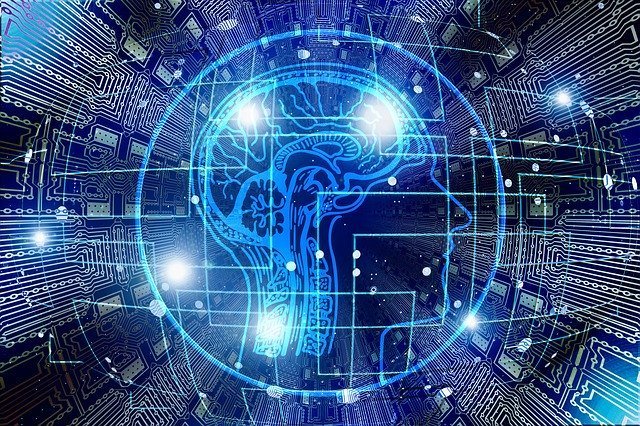 This is a normal reaction in the face of a technological change: postpone, think about it, wait for time to give you answers or for the technology to spread.

By nature man responds with a certain resistance in the face of change.

The problem is that to postpone and wait for your competitors to start using 3D printing, instead of being a pioneer and conquering the new world, could cost you a big slice of your income and important customers in the near future.

According to Everett Rogers, the American communication theorist and sociologist, each change or invention is subject to the laws of the adoption curve.

It is a model which classifies adopters of innovations into various categories.

This study explains that there are individuals who are naturally more open to innovation than others.

As Darwin explained in the Origins of Man, adaptation is a basic characteristic which allowed our ancestors to endure changes in evolution with less difficulty, surviving through the centuries.

Those who did not adapt became extinct.

Adaptation is a kind of natural selection which eliminates the weakest making the strongest individuals move forward. 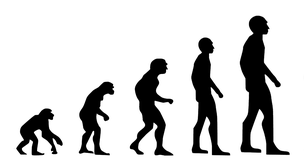 The innovators are brave people who drive change; they are the people who communicate their results showing how much change leads to great benefits:

Innovators are people who leave an indelible trace in the history of mankind and move progress forward, changing rules, following their instincts and going against the flow.

The innovators are those who see beyond what exists and build a future that is not yet there.

Without them, there wouldn’t be what we have today and we would still be living in the Stone Age.

I see myself as an innovator since I was the first to engineer a 3D printer only for mechanical applications and which works only with one material: steel.

Moreover, I am also the first to help entrepreneurs approach this technology without risking capital.

As a good innovator, therefore, at the end of the article I will show you where you can find the results and benefits of 3D printing for only steel, an innovation which I am the first to bring to Italy and the world, as stated in Business Insider Italia.

Who are some other famous innovators who have changed history?

Henry Ford: the first to introduce the assembly line.

Thomas Edison: inventor of the light bulb; nobody believed that his invention could work.

Steve Jobs: the man who invented the smartphone.

Tesla: are electric cars really the future? In the meantime the market value of this new technology has grown by +25% in Italy in 2019.

The first adopters are leaders, they are the ones who carry the innovation forward, testing in complete safety, relying on numbers, statistics, tests and science.

Early adopters are people who will lead the market with pride and success, reaping the benefits of the technology before others and more advantageously

At the end of the article you will find out how you could become an early adopter in complete safety.

Caring and careful people who accept change more easily than the average person. 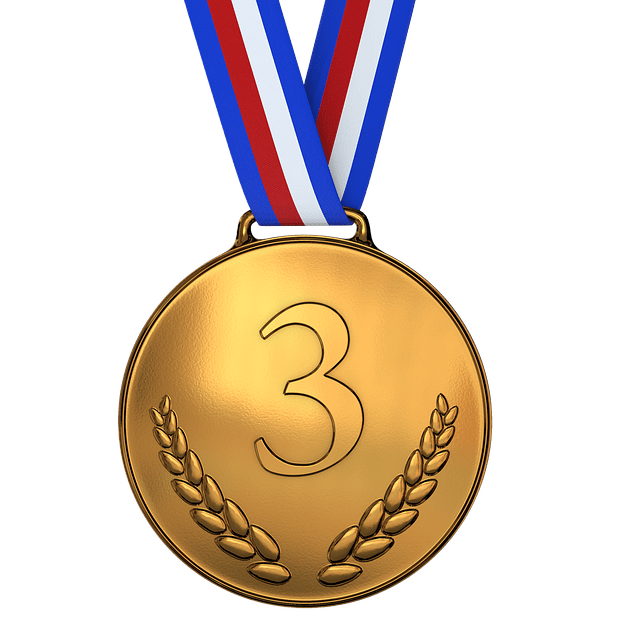 These are the people who come second or third in life: to stand on the podium even if not in a high position is not bad, after all not everyone can be first and it is certainly better than being the last.

However if you are aiming for success, to be the only one to achieve goals and profits never reached before, if you are not satisfied with being like everybody else, you certainly don’t want to find yourself in this category.

People in this category are the skeptics, who use new ideas or innovations only when everybody else is using them.

These are the people who will gather the crumbs of the benefits of the new technology. 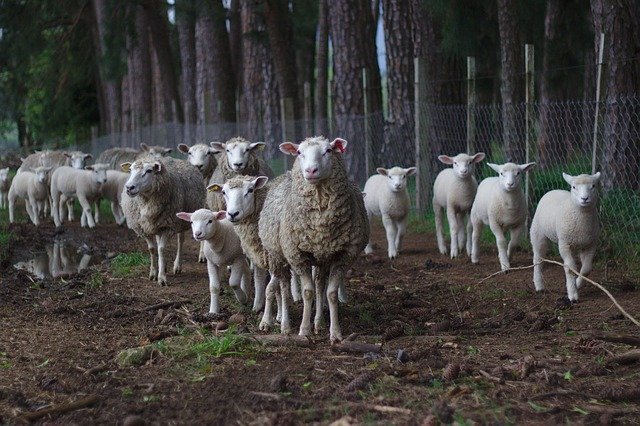 These are the sheep, those who follow the shepherd or other sheep but do so with apathy, not because they have an outstanding, brave and enterprising personality.

Even if 34% of the population is in this category, I bet none of them would really like to be in this group.

Being skeptical is right because we must rely on numbers and tests not on philosophical abstract promises, but skepticism can be limiting when you are skeptical on principle and you are blind in the face of scientific proof.

Traditionalists who stick to the old ways like clams on rocks, criticizing, regardless, any novelty, even if better than the old way of doing things.

This category adopts innovations when they have become the norm, of common use and therefore a new tradition. Absurd, isn’t it? 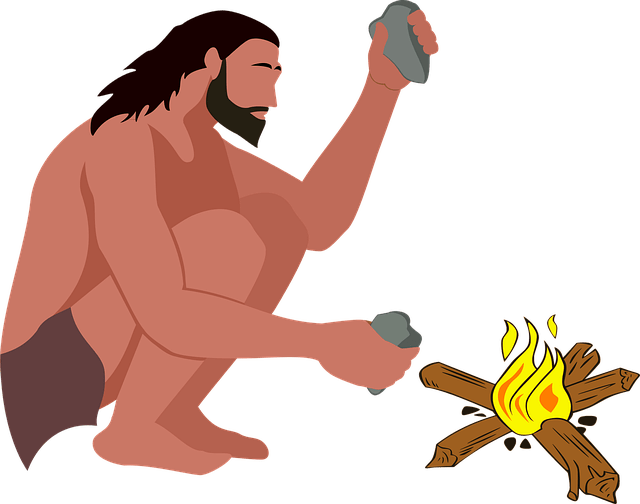 The concept of categories is fundamental because it shows how an innovation must first of all go through a natural process, predictable and long, before becoming widely adopted within a society.

It also shows, however, that waiting for the innovation to become of common use is not the strategy to achieve success and obtain the best benefits of a technology. 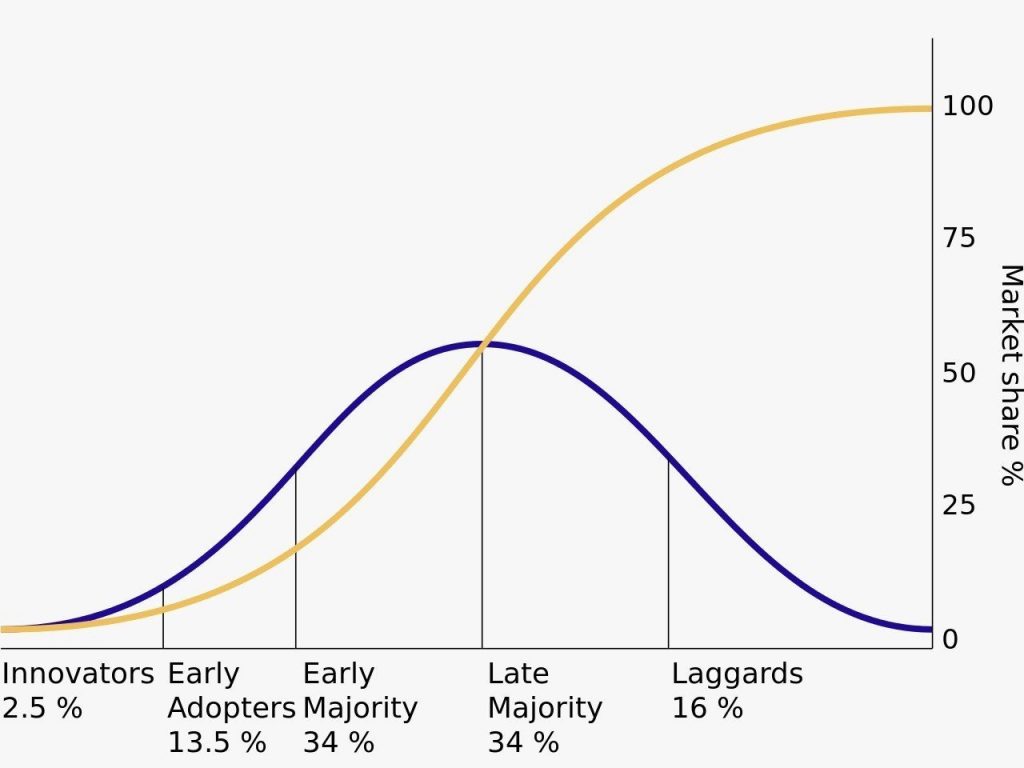 Now I want to ask you a question:

Would you like to exploit the best advantages, in a more significant way compared to your competitors, or do you prefer to be part of the last two categories which will always lag behind all the others.

The 3D printing market will explode sooner or later: there are already some early adoptors who are enjoying maximum benefits.

When this market hits saturation point, as happened with the smartphone, investing in 3D will be the daily norm and the advantages you will obtain will be less compared to the advantages achieved by the early adopters, why?

Because all the market and your competition will be using this technology, this trump card and, therefore, you will  no longer have a competitive advantage, in fact you will have to adopt 3D printing out of necessity in order not to be left behind.

Therefore, you will run at the same speed as your competition or you will be slower, but you will never surpass them until another technology which will change the world appears on the market and you will be one of the first to try it.

I am giving you the opportunity of changing category, of becoming an early adopter without asking you to invest in a 3D printer: to be an innovator, you must begin by taking small strides.

Here is one: while your competitors are taking their Christmas holidays, relaxing, watching trash TV, you can relax reading a book on 3D printing.

Inside the Bible of 3D printing: 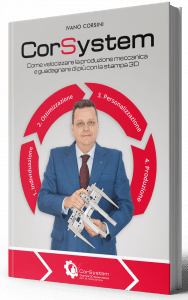 All you have to do is click on the orange button at the bottom of the page and ask for your paper copy as soon as possible; that is before this technology spreads and you remain in the category of the late majority biting the dust left by the early adopters.